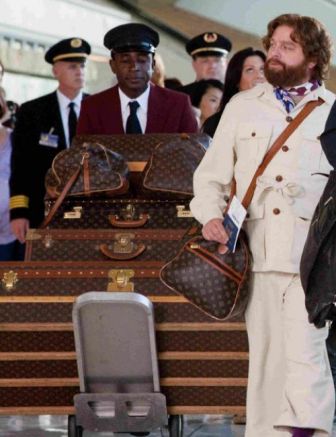 On December 2011, the French fashion house Louis Vuitton sued the American film company Warner Bros. on the grounds of misuse of a travel bag in the film “The Hangover: Part II” that allegedly infringed upon the plaintiff’s trade marks. Said infringement occurred, according to the plaintiff, in the scene where Alan Garner (Zach Galifianakis) is at the airport carrying on his shoulder the bag, which is counterfeit, shortly after he takes a sit on a bench and  then says: “¡Careful!...that is a Lewis Vuitton”.

The French company’s claims for relief were based on false designation of origin, unfair competition and trade mark dilution, whereas Warner Bros defense was based on failure to state a claim on which relief can be granted.

on June 15 2012, the judge, Andrew Carter, from the U.S. District Court for the Southern District of New York , concluded that:

- The use of the counterfeit bag has some artistic relevance to the plot of the Film.

- Warner Bros. had no intention to mislead the public.

- Warner Bros.’ non-commercial use of the trade mark involved.

- The defendant does not explicitly mislead viewers into believing that Louis Vuitton has authorized or endorsed the appearance of the bag in the movie.

This decision confirms that the use of trade marks in artistic works in most cases is permitted.