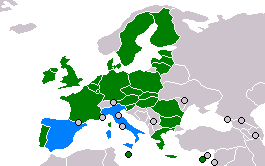 The European patent system is a simplified newfangled mechanism whereby the patent can be protected automatically in the area of the 25 countries party to the agreement for the creation of an especial jurisdiction, which implies a simplification in the proceedings and a strengthening the protection of inventive activity.

But this protection formula has had not a good start. The European Court of Justice (EUCJ) has recently pronounced on the system of European Unitary Patent as a result of the action brought by Spain and Italy claiming for including Spanish and Italian as official languages in that system.

The European patent may be solicited prima facie in whatever language.  However, it has to be accompanied by a translation either into English, French or German, the only official languages at the European Patent Office.

The Spanish allegations were founded in the incompatibility of the unitary patent system, as it is proposed, with the Union Treaty and the eventual prejudice it might cause to the territorial, social and economical cohesion which would redound in a prejudice of the European market.

The EUCJ has mentioned in the ruling that the European Unitary Patent System is “totally compatible to the EU Treaty” and it doesn’t impair the Common European market, neither does it to the economical, social and territorial cohesion in the EU as Spain argued.

Additionally, the Court has recalled that both, Spain and Italy, may adhere to the European Unitary Patent System at any time, since they do not participate in the system due to self-exclusion.

Professor Manuel Desantes has analised in detail the issue in a post published at Blog Conflictus Legum.