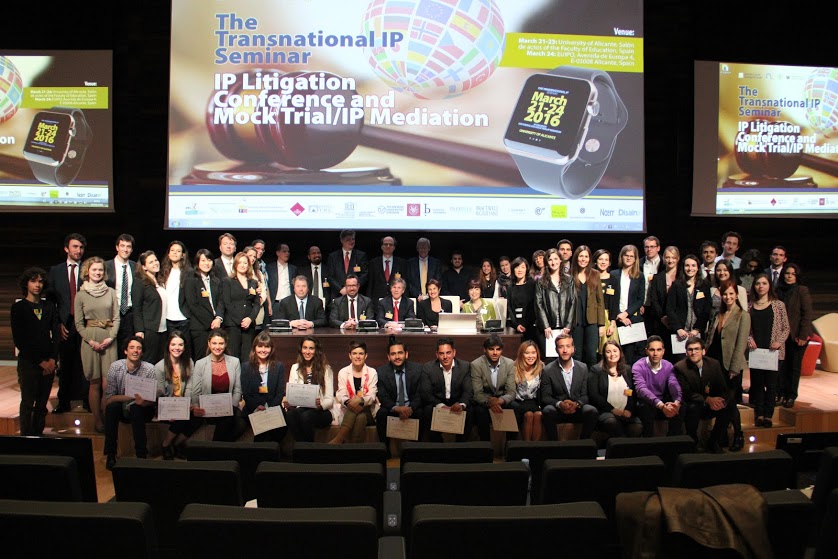 The Transnational IP Seminar was hosted this year by the University of Alicante, from March 21 to 23, and by the EUIPO on March 24. It is not every day that the University of Alicante has the privilege of hosting distinguished jurists, professors and attorneys from around the world to help to train the next generation of international legal practitioners, in a world that is globalizing more and more each day, an international understanding of the law becomes ever-more important. As Judge Muscolo of Italy expressed, this edition was specially touching for all of us since was taking place at a principal IP institution of the EU one day after the terrorist attack in Brussels, Belgium.

One of the most important highlights of this year's Transnational IP Seminar was that, for the first time in these seminars, we were not only training to litigate, but also to mediate. After the inspirational opening presentation of Professor Manuel Desantes on the IP System in the EU, Professor Lydia Esteve and Richard MacBride - attorney at law and mediator in California, USA -- presented a Powerpoint on the benefits of IP mediation as against the traditional time-consuming and costly adjudication process via an IP trial. Topics of high importance on the first day included: the interpretation of "look and feel" in both the US and European trademark and design protection systems; copyright protection in the US, Europe and Spain; and design patent protection in the US Patent and Trademark Office. These were presented by Professor Toshiko Takenaka of the University of Washington, Professors Pilar Montero and Julián López, from the University of Alicante, Dr. Matthias Bosch, a patent attorney of Counsel Group Intellectual Property and Media, and Robert Katz, an attorney specializing in utility patents and industrial designs. This first session was closed with great presentations from Professor and former Chief Judge of the US Court of Appeals of the Federal District, the Hon. Randall Rader, and Stefan Schohe, German patent attorney and European patent and trademark attorney (Boemert & Boemert). They discussed patent protection of software and business methods.

The second day, the attendants continued receiving lectures from outstanding specialists in Intellectual Property, namely: lawyers from the European firm of Bardhle Pagenberg, Christof Karl and Michael Kobler; attorney at law, Benjamin Grzimek; Eli SALIS, Attorney at Law (of Disain IP); Prof. Paul Meiklejohn, Partner in Dorsey’s Intellectual Property Litigation Practice Group; and Dr. Ivan Sempere, hon. professor at the University of Alicante School of Law, Head of the legal area and partner of PADIMA. These speakers shared their insights on the following practical IP issues: direct and indirect infringement under the US, German and Spanish Patent Acts;  infringement of the US design patent and infringement remedies; and infringement remedies of EU design rights.

The day before the mock trial, Professor and Legal Counsel of Microsoft Andy Culbert explained managing multinational litigation; he was followed by Dr. Christof Karl, German attorney at law, US attorney at law, German and  European Patent Attorney (Bardehle Pagenberg) and Professor Pilar Íñiguez, of the University of Alicante School of Law, who explained the extent of patent protection under the US, German and Spanish Patent Acts. Next came Professor Doug Stewart - US patent attorney (Bracewell & Giuliani)- , Michael Kobler - attorney at law (Bardehle Pagenberg) -, and Isabel Ibarra - Engineer, PQ European patent attorney and head of the innovation area in PADIMA - who shared their knowledge on Patent Trials under the US, German and Spanish Patent Acts.

Every day, following the conferences, the students were grouped separately in order to prepare mock proceedings from different countries, each guided by lawyers and attorneys with an ample experience in IP matters, trials and mediations: Paul Meikljohn, Doug Stewart, Andy Culbert, Benjamin Grzimek, Christof Karl, Toshiko Takenaka, and Richard A. MacBride.

The day after the attack in Brussels, Belgium, we all dedicated the IP Conference trial and mock mediation to the memory of the victims of the attack. The Conference was opened on March 24 by a great presentation of the Head of the Communication Service of EUIPO, Luis Berenguer, who pointed out that our IP Conference was the first  public event of the ex-OHIM, newly renamed as the EUIPO, pursuant to the new EU Regulation 205/2424 of the European Parliament and the Council amending the Community trade mark regulation.

At the EUIPO we had the opportunity to listen to leading IP experts speaking on very exciting topics. Dimitris Botis - EUIPO Deputy for legal affairs, international cooperation and legal affairs, gave us a great, clear and dense presentation setting out EU protection of trademarks and designs before the EUIPO. Theóphile Margellos - President of the European Union Intellectual Property Office Boards of Appeal and mediator- and Sven Stürmann - team leader of the Knowledge & Legal Support Team of EUIPO Boards of Appeal Knowledge & Support Service and mediator, continued persuading us on the advantages of Mediation, explaining how mediation at the EUIPO works, and Paul Maier, the Director of the EU Observatory on Infringement of IP Rights, presented the goals of the Observatory.

The period of March 21-24 was intense for all the attendees of the seminar, and not only due to the Holy Week processions that took place every day in Alicante. The students were ready to do their best during the Seminar and at the Mock Trial and the Mock Mediation on March 24, in EUIPO's beautiful Auditorium.

In sum, the cases of the mock trials - which were the same for the German and US scenarios - as well as the mediation simulation, were based on the case of a possible design and trademark infringement between smart watches.

Elements of the designs and trademark, e.g. the screen, the wrist strap and the color yellow, were the focus in this case, in which the judges from US and European Courts had to arrive at the final verdict. In the US mock proceeding, Judge Randall Rader also had to take into account the jury's verdict.

The Trasnational IP Seminar gave a unique opportunity for the students and to all the participants to hear illustrative seminars as well as to live the experience of a mock trial, whether it was in the role of the legal counsel, the jury (in the US trial), the witnesses, or the parties at the mock mediation. This experience, which put into practice everything the students learned in the previous days, was enriching for students and speakers alike.  The students did an outstanding job before Judges Randall, Zingann and Muscolo, and before the mediator Richard A. MacBride.

According to all the participants the Seminar was a success, and  Professors Toshiko Takenaka and Lydia Esteve reiterated the importance of Seminars such as the Transnational IP Seminar in furthering the goal of professionals and students from different countries to learn to work and study together regarding differences IP matters around the world.

It was a great pleasure for us to have hosted this year's Transnational IP Seminar, and we are looking forward to participating and collaborating in years to come.