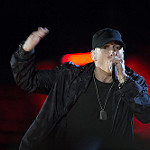 On 1 May 2017, the case against the use of an unlicensed version of Eminem's famous song "lose yourself" began at the High Court of Wellington.

The song was used in an advertisement in 2014 by the National Party, which the party's lawyer alleges to be a track called "Eminem-esque" bought from a stock music library, and not Eminem's iconic song which appeared in his 2002 film "8 Mile".

It is common practice for free-to-use commercial libraries to feature songs which sound similar to sound tracks, but are different enough to avoid breaching copyright.  However, in this case, the US rapper's lawyer considers the use of the song at issue had to be a breach of copyright.

Eight Mile Style lawyer Gary Williams also presented emails en which various members of the National Party expressed their concern back in 2014, due to the similarity between the song chosen for the electoral campaign and "lose yourself".

Defense lawyer Greg Arthur said copyright was "not in any way proven by the name given to a piece of music".

The case is expected to continue for six days. Until then, you can judge for yourself whether there is copyright infringement or not. Here is a link to the advert with the conflicting song: https://www.youtube.com/watch?v=470bdH73TUY